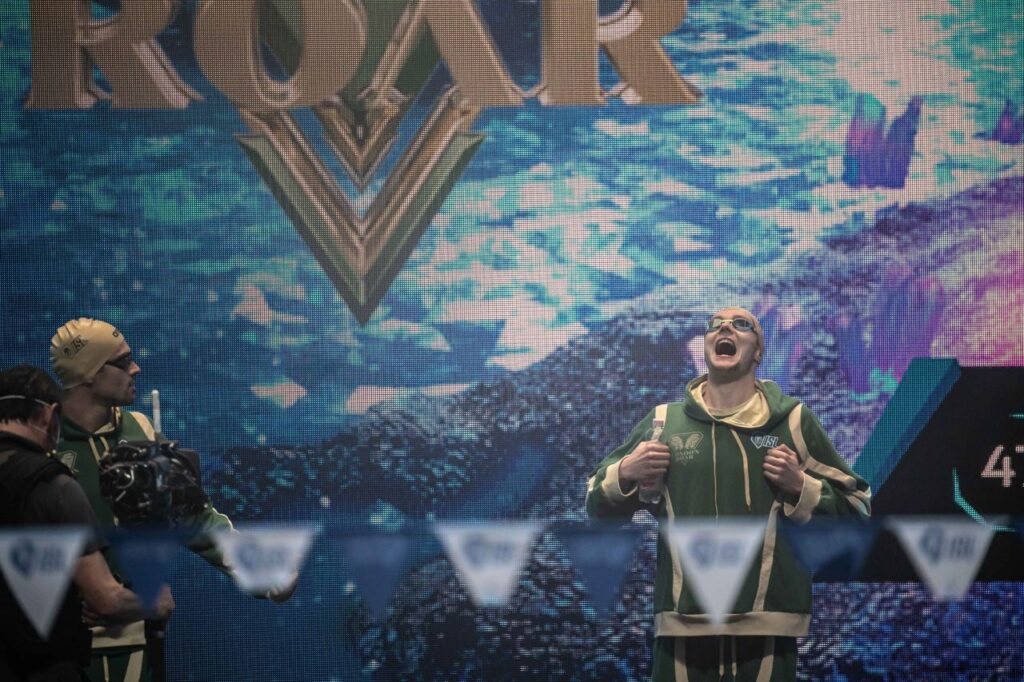 London Roar built on their overnight advantage to record their second victory of Season 2020 of the International Swimming League (ISL), joining the Cali Condors as the only other team with an unblemished record after two matches.

But it wasn’t easy for London in Match 5, as they were pushed hard by LA Current over the two competition days and are now top of the ISL standings, having competed in one more match than the Roar and Condors.

Freya Anderson, Alia Atkinson and Guilherme Guido all won more than once race for London and Atkinson showed that London coach Mel Marshall was correct to select breaststroke for the women’s 50m skins elimination race by coming home first.

Andreas Vazaios gave London their second victory in the men’s 200m individual medley, before Adam Peaty showed his class to win the men’s 50m breaststroke, having finished sixth in the 200m breaststroke earlier.

Toussaint, Wattel and Atkinson then teamed up with Freya Anderson, who anchored the 4x100m individual medley relay team to victory.

Anderson enjoyed London’s first win of Day 2, in the 100m backstroke, a victory that teammate Guido matched in the men’s race when he held off the fast-finishing Murphy over the final few strokes.

Atkinson won her second race of the match when she led home teammate Annie Lazor in the 100m breaststroke, before returning to win the final race of the match – the 50m skins elimination race, which Marshall had earlier determined would be the breaststroke after her team had won the 4x100m medley relay the day before.

“It was hard for us this morning and I think we have to make sure that we treat Day 2 as a new day,” Marshall said.

“We had some tired athletes and I think we battled hard. We have to go back and see how we can improve the details, but overall, the guys did great today.”

Gastaldello continued her rich vein of form from Match 3 when she opened Match 5 with victory in the women’s 100m butterfly, touching the wall in an impressive 55.84 and she later added a win in the 50m freestyle.

Shields matched her victory in the men’s 100m butterfly when he held off London’s Marius Kusch, the American becoming the only swimmer so far in Season 2020 to break the 49 second barrier (48.94).

In the 200m backstroke, Murphy was challenged by compatriot Jacob Pebley of the DC Trident and Ryosuke Irie of the Frog Kings but collected the points for Current in style by posting the fastest time in ISL history: 1:48.03.

Will Licon kept the Current’s run going with their fourth win in the opening six matches on Day 1 by touching home first in the men’s 200m breaststroke, while Kristian Gkolomeev used his international experience to get the victory in a field full of stars, being the only swimmer under 21 seconds (20.97).

Gastaldello opened Day 2 with victory in the 100m freestyle, though she was pushed hard by London’s Anderson. The competition clearly spurred Gastaldello on, as she finished with a French record (and personal best) of 51.30.

Shields claimed his second victory, in the 200m butterfly, which was followed by Tomoe Hvas beating the field in the men’s individual medley.

Andi Murez underlined LA’s strength in the freestyle by opening a big lead and holding off the fast finishing Anderson to finish in 1:53.58, before Gastaldello won the 50m butterfly, her seventh ISL victory in that distance.

LA’s relay team secured another victory, in the mixed 4x100m freestyle relay, thanks to a powerful final leg by Abbey Weitzeil.

“There is always a different feeling in relay teams and sometimes you can go faster in the relay as you can get out of your head a bit,” Weitzeil said. “I think a lot of the girls have been stepping up and it is really strong throughout the team.

“I think relays are where teams shine, and I think that is shining through right now.”

Shields ended the match with yet another victory, after Marsh opted for butterfly as the stroke in the 50m skins elimination race. He did not disappoint and held off Tokyo’s Takeshi Kawamoto to become the first butterfly swimmer to win an ISL skins race.

Sakiko Shimizu claimed Tokyo’s first win of the match, in the 200m breaststroke, and Yui Ohashi added Tokyo’s second with a late kick in the women’s 200m individual medley.

Leah Smith and Chihiro Igarashi gave the team a boost with a one-two finish in the women’s 400m freestyle, and while Tokyo did not match the highs of its ISL debut a few days earlier, six second-place finishes and five third-place finishes showed their competitive potential.

On Day 2, Suzuka Hasegawa won the women’s 200m butterfly for the second time in two matches, finishing ahead of teammate Sakiko Shimizu in 2.03.38 that earned Tokyo 19 points.

Runa Imai also repeated her victory from Match 3 by touching home first in the women’s 100m individual medley before Katsuhiro Matsumoto recovered to win the men’s 200m freestyle with the most exciting performance of the day.

He had been leading for most of the race, but London’s Duncan Scott appeared to have caught him over the last 50m, before Matsumoto hauled in Scott in the final 10m to reach the wall first and become the only swimmer sub 1:42 so far this season.

Kawamoto gave Tokyo more to cheer when he won the men’s 50m butterfly, and Yasuhiro Koseki posted the upset of the day when he beat a pool full of Olympic and World Champions to win the men’s 100m breaststroke in 56.11.

“I think training has helped us get close as a team,” said Smith. “Today it was hard to get up and go knowing we did a good race last week. We did a great job of muscling through everything.

“We won so many races today and I really enjoyed watching everyone light it up.”

Amy Bilquist set DC going when she won the women’s 200m backstroke, but DC had to be patient for its next success: DC’s Zane Grothe and Velimir Stjepanovic led from the start in the Men’s 400m freestyle and never looked back, closing with amazing speed and great endurance to finish tied for first with a time of 3:41.46.

Zach Apple opened Day 2 with the team’s third victory, when he held off London’s Duncan Scott in the men’s 100m freestyle.

Trident were unable to add any more victories, but they ended Day 2 with two second-place finishes and four third-places to show their potential for future matches.

“The 200m back it something I protested about swimming for a long time,” Bilquist said. “There hasn’t been a ton of pressure on me, so I’ve been able to just go out there and swim fast and technically I need to rely more on my back half.

“Sometimes I go out there and want to go fast, but I shouldn’t worry about what everyone else is doing.”