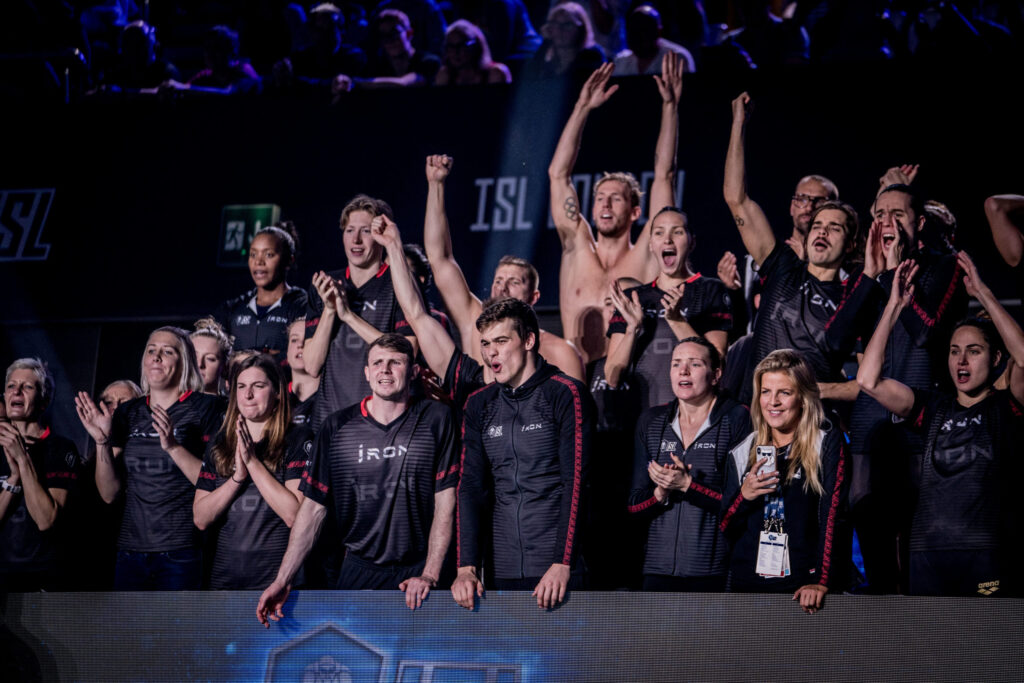 Coming into the inaugural season of the International Swimming League, one of the biggest challenges facing each club was the fact that they had to come together and become a team in a short period of time.

Swimming is traditionally an individual sport, so flipping the switch and fully buying into the team concept, especially when you don’t know all of your teammates, is no easy task.

Iron, the league’s Hungarian-based club, had a core of local athletes from Hungary, but with a total of 15 nationalities represented on the roster, several of them weren’t familiar with one another when they kicked off competition in Lewisville.

In that opening Group “B” match, where Iron faced a tough lineup that included the London Roar and LA Current, they placed third — 55 points back of the runner-up Current. The next match, just one week later, would be held in Budapest, so Iron would be facing a bit of extra pressure racing in front of their home crowd.

The club came together to perform exceptionally better, improving their score by 23 points while beating out the Current to take second place.

“We were very happy about the progression we made from Dallas to Budapest,” said Iron general manager Dorina Szekeres, a 2012 Hungarian Olympian. “I think we did our best swimming in Budapest in front of the home crowd.”

Team captain Peter John Stevens saw the progression from the first match to the second as a by-product of how the team managed to come together.

“I believe that from the first to the second stop we already made a great step towards giving our all for the team,” said Stevens, a Slovenian breaststroke specialist. “Spending more time with each other we grew a mutual respect and I feel this caused our teammates to care more for one another, so this gave us the advantage.

“I have noticed that individuals on the team really adapted to the team atmosphere and started investing energy into everyone on the team and not just being focused on themselves.”

Having a club that gelled outside of the pool and having that translate into their performances was always something Szekeres envisioned when putting together the roster.

“We wanted to build a competitive team that could be in the race to make the final, but we also wanted the team to have good chemistry and enjoy each other’s company,” she said. “My experience is that people can perform better if they have a good group around them who motivates them and those who have fun during the process.”

“The team spirit was amazing in my eyes and higher than expected,” added Stevens. “In such a short period of time we had a great connection between everyone on the team.”

Forced to field a shorthanded roster at the European-Derby in London, Iron placed third place once again, trailing the eventual ISL Champion Energy Standard and the Roar. With only the top-two European clubs advancing to the Las Vegas Finale, this meant Iron was locked out.

“London was a bit challenging as our roster changed quite a bit, but we did our best there as well finishing strong,” said Szekeres. “It was unfortunate that we were in the same group with the two best clubs in the whole league so it would have been very challenging to advance, but our goal stays the same for next season — to make the final.”

Despite missing out on qualification for Vegas, Iron had three of the most impactful swimmers of the season on its roster. Katinka Hosszu, who was also a co-owner of the club, was a force in the water, even winning Match MVP in Budapest.

“I wanted (Katinka) to be happy with and proud of the team we put together,” said Szekeres. “As a swimmer, she was obviously a huge value winning the 200 and 400 individual medley and the 200 fly at all three matches while also scoring in other events and helping the relays as well.”

Also standing among the league’s superstars were Vladimir Morozov and Ranomi Kromowidjojo. The pair were lights-out for the club in the match-ending skins, the three-round 50 freestyle eliminator that scored up to triple points. Kromowidjojo went a perfect three-for-three in the skins, while Morozov was two-for-three and added MVP honors at the Lewisville match.

“Ranomi and Vlad were two of the first swimmers we wanted to join the team because of their ability to swim several events fast during the season,” Szekeres added. “We were also hoping that they would excel in the skins but we didn’t think they would be as amazing as they were.

“Finishing each meet with the excitement and success of the skins was a huge boost for the team and the most fun you can have at a swim meet.”

And while his impact may not have been as significant on the scoreboard as the others, another swimmer Szekeres points to as being a key cog in Iron’s success this season is Stevens.

“He may not have had the best meet of his life, but as a team captain, he helped a lot of his teammates to perform well,” she said. “His leadership had an undeniable impact on the team.”

From Stevens’ perspective, the athlete who stuck out to him the most was Jessica Vall.

Unable to compete after the first match, she continued to support her teammates, which is symbolic of how close everyone came together in such a short period of time.

“She only performed in Dallas, but was unable to perform in Budapest when we traveled as a team,” he said. “She kept the positive vibe on the team and really made us do better. She could have decided to stick to herself since she had no events to swim in Budapest, but kept her spirits high to invest her time and effort into the others who did swim there.

“I think that is a great step and really key for a team to succeed.”