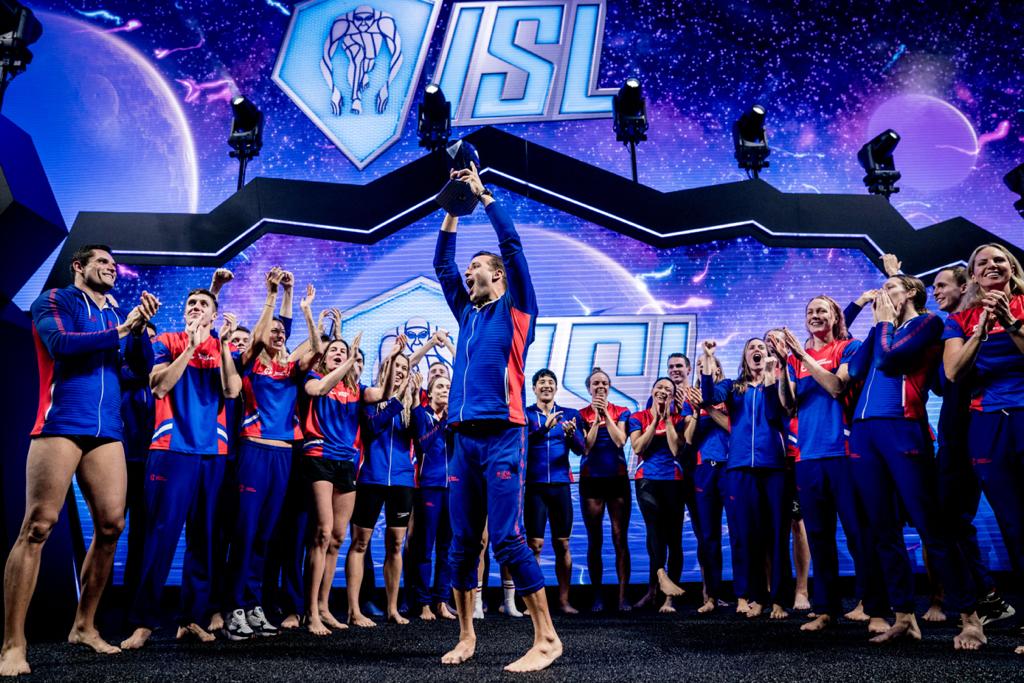 The International Swimming League’s Grand Finale produced a fitting end to its inaugural season, as the race to become ISL champions came down to the exhilarating match-ending skins with three clubs in contention.

The skins races, which ends each match in the ISL, pits the 8 best sprinters in the meet against each other in a 3-round 50 freestyle shootout. From the original field of 8, the top 4 advance to race again 3 minutes later, before the field is whittled down to 2 that race head-to-head for the event win. The races are worth 27 points for the winner, as compared to just 9 for winning a regular individual race.

The London Roar held the lead for the majority of Day 2, but, as we’ve seen throughout the entire season, Energy Standard came through with a big skins performance to come away with the victory by a mere 9.5 points.

“It brings tears to my eyes, it was unbelievable,” said Energy’s male captain Chad Le Clos. “You couldn’t have written a better script. We had our backs against the wall in the skins, and they pulled it out, Sarah (Sjostrom), Femke (Heemskerk), Flo (Manaudou) and Ben (Proud). They were phenomenal. Big ups to them.

Sjostrom won the women’s skins to clinch the ISL Season MVP title, topping London Roar’s Cate Campbell in the final round in what proved to be a critical swing in the overall standings.

“I knew that the skins would be a real burner here, so I was just trying to focus on my own race and all the details like starts and turns,” she said. “It was so exciting all the way, there are so many strong teams here and it was so close. We were really fighting all the way to the end and we knew that every point matters. It was very exciting.

“It feels great also, to win the overall MVP title, so I’m very, very happy with this.”

Despite losing by such an agonizingly close margin, London Roar head coach Mel Marshall was very pleased with her club’s effort.

“I couldn’t be more proud of the guys, they absolutely swam their hearts out the whole two days,” said Marshall. “We got stronger and stronger each round. We had a good day yesterday, and we asked them to be great today, and they were great.

“I can’t ask any more of them, everybody did their bit tonight. And when it comes down to this level, there’s going to be one winner and one loser. And tonight, I think everyone’s a winner because the event was such a success.”

Caeleb Dressel of the Cali Condors was the top scorer in the finale to win his third match MVP title with 121 points. The point-totals in Vegas were doubled relative to the regular season, hence Dressel’s massive total, and he also earned $10K (rather than the usual $5K) for the win.

“I would’ve rather had the team title,” said Dressel, whose Condors were right in the thick of the race for the team title up until the end of the match. “On paper we weren’t supposed to do as well as we did. It came all the way down to the skins. No one knew whose title it was going to be, so I’m really proud of this team.”

Dressel was a workhorse for the Condors, racing a total of 11 times over the two days if you include the three rounds of the skins.

“It’s been fantastic. These meets are brutal (physically), honestly, but that’s the way they have to be set up so we can get people interested. Just look around, it’s incredible.”