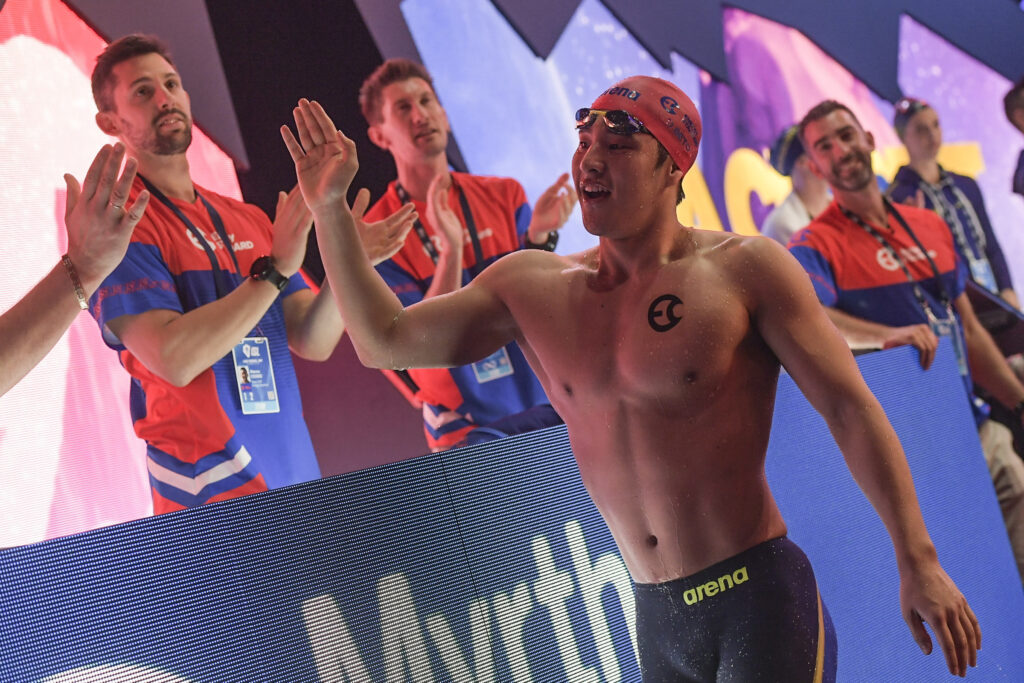 The highly-anticipated International Swimming League Grand Final lived up to the hype on Day 1, as Las Vegas was treated to an incredible two hours of racing that featured record-setting swims, agonizingly tight team battles and plenty of exciting finishes.

Energy Standard lead the battle to become the inaugural ISL Champions after spectacular showing on the opening day, leading the match with 219 points, 13.5 clear of the Cali Condors. With tons of points available on Day 2, including 27 to the winner of each of the two meet-ending ‘skins’ races, all four teams are still in contention.

After Cali got off to an incredibly hot start with five straight wins, newcomer Daiya Seto of Japan got Energy Standard’s momentum started by smashing the world record in the men’s 400 individual medley, recording a time of 3:54.81. That swim marked Seto’s ISL debut.

“He was fantastic wasn’t he,” said Energy Standard head coach James Gibson on Seto’s swim. “He went through the first 100 two seconds under world record pace, and he even said he could hear the box cheering when he came back. It’s the first (world record) in the final.”

The women’s 4×100 freestyle relay followed that up with a 1-4 finish to move the club into the overall lead, and they wouldn’t relinquish it the rest of the day.

Also highlighting the club’s effort was Sarah Sjostrom, who won the women’s 50 free and was fourth in the 100 butterfly, and their men’s 4×100 medley relay also picked up a crucial win.

Gibson knows that, despite the lead, it all comes down to what happens on Day 2.

“Obviously I’m happy we’re winning the meet,” he said. “But, ultimately it means nothing because it’s all about tomorrow. Trying to get our hands on the trophy.”

Despite Energy Standard holding the lead, the Cali Condors arguably had the best performance overall, winning a staggering nine of 19 events — led by three swimmers who won two apiece.

Caeleb Dressel won the men’s 100 fly early on, and then followed that up by taking the 50 free in a new world record time of 20.24, keeping him undefeated in that event this season.

Also doubling up with wins for the Condors were Lilly King and Nic Fink, who swept the women’s and men’s 50 and 200 breaststroke events respectively. Both athletes set new American Records in the 50 breast, while King’s two wins kept her unbeaten streak alive in the stroke. The 22-year-old has won all 11 female breast races she’s contested this season.

“It was a good day,” said Cali head coach Gregg Troy. “A little up and down in a couple of spots, but in a meet like this with really good competition that’s what a team dynamic is really going to be about.”

The London Roar had a bit of an up and down showing on Day 1, but remain within striking distance as we head to Day 2, where they’ve typically been stronger this season.

The Roar had a couple of big wins late in the session from Alexander Graham in the men’s 200 free and Guilherme Guido in the men’s 50 back, as those two swimmers finish the season a perfect 4-for-4 in those events. A victory in the men’s 4×100 free relay to close out the day gives them a solid momentum boost heading into Saturday.

“It was a fast field, so I had to take it out hard,” said Graham on his 200 free win. “Get the maximum points, it’s good. I wanted that one pretty bad, but I’m doing it for the team as well. It’s good to have the team behind me.”

The LA Current find themselves 16.5 points back of third place with 185.5, but are by no means out of the hunt. Their day was highlighted by consecutive victories from Ryan Murphy and Kathleen Baker in the men’s and women’s 200 back.

Head coach David Marsh is confident that the club will continue to improve as the match rolls on.

“In all of the meets we’ve started off kind of slow and picked it up within,” he said. “We’re really relying on that. We’ve got to get momentum. I think as we calm down and get into our races we’re going to swim a lot better.”