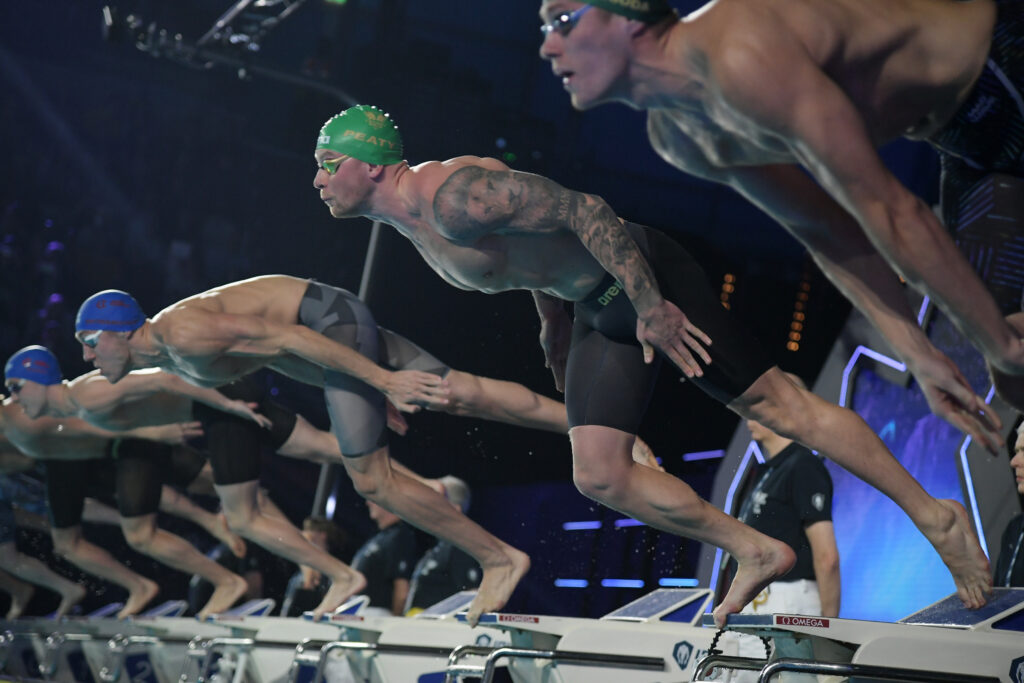 The International Swimming League’s regular season concluded with the European derby in London, as Energy Standard edged out the hometown London Roar to win their third match and remain undefeated heading into the Grand Final in Las Vegas.

Energy Standard earned the victory in the match-ending skins event, the three-round 50 freestyle eliminator, where they erased a 16.5-point deficit to London and came away with the win by 11 points.

“We were pretty confident in the strategy,” said Energy Standard head coach James Gibson post-match. “I’m really proud of my guys. The last few meets they’ve been behind all the way, or on the second day, and they always come over the top. They know exactly what they need to do.”

The club also used the skins to comeback from an even bigger deficit to beat the Cali Condors in Naples back in October.

“As every meet goes by the education happens, and everyone understands that the meet comes down to the skins,” he said. “You’ve got to keep getting in there, you’ve got to fight for those single points, and you’ve got to give the skins swimmers the opportunity to win the meet. And that’s exactly what happened again.”

While they came out on top this time, Gibson knows the London Roar pose a huge threat to them in the December finale.

“We’ve got a lot of respect for London,” he said. “They’ve got a very strong team. Rob Woodhouse, the general manager, did a fantastic job with the recruitment process early on, and they’re going to add a lot of strength in Vegas. They’re going to come all guns blazing. And we know that.”

“We’re the only team unbeaten, but anything can happen. Vegas is four great teams; people will take points off each other the whole way through. We could finish fourth in Vegas or we could win it. That’s the beauty of this format.”

Winning match MVP with the most points scored for Energy Standard was male captain Chad Le Clos, who finished off Day 2 with an impressive victory in the men’s 200 butterfly.

“I had my eye on the MVP, I’m not going to lie,” laughed Le Clos. “I knew I had to win (the 200 fly) to get MVP, so it was very important for me to get that. I really wanted to win one of those before the ISL season finished, so I’m very proud of that.”

The match, and his 200 fly swim in particular, brought back some old memories for the South African, as he had upset Michael Phelps to win Olympic gold in the same pool seven years ago.

“I swam out of lane five in the 200 fly (like he did at the Olympics), so it was a very special moment for me,” he said. “On that last turn I just had to bite down on my tongue and close my eyes, just like I did at the Olympics, so I was very happy.”

“It’s a special pool, magic happens here for me.”

One major takeaway from the match was how energizing the crowd was for all of the swimmers, whether they were on the home team or not.

“The crowd was electrifying,” added Le Clos. “Even though they’re not supporting us fully, it was just beautiful to walk out and have that atmosphere.”

“We’ve obviously got the passion,” said British star Adam Peaty of his hometown fans. “This country has a heritage of loving swimming, we’ve got a heritage of performing, and what better arena to do it in than in the London 2012 stadium. You’re always going to fill it out, you’re always going to get that passion from the fans, and I think that’s the most important thing.”

“You heard the crowd in here tonight and how much that lifted us,” said Roar coach Melanie Marshall. “On paper we maybe shouldn’t have gotten as close to Energy Standard as we did tonight, but that was all through everybody’s character and stepping up, and the crowd lifting us.”

In the race for third, Iron managed to edge out the Aqua Centurions with a strong Day 2 performance. Their captain, Katinka Hosszu, was disappointed to see her ISL season come to an end, but is looking forward to 2020.

“It has been so much fun,” said Hosszu, who won three individual events over the course of the match. “I’m not going to lie, we are pretty sad that it’s over for us, we’re not going to be in Vegas. I feel like we were just coming together as a team. I’m really looking forward to having a longer season next year.”

The Hungarian went through a bit of an adjustment period throughout the league’s inaugural season, as she was balancing a lot of different responsibilities she wasn’t used to.

“It has been a bit difficult at the beginning for me, because I have many roles in the ISL, as well as in the team,” she said. “Being an ambassador, being the team owner, being the team captain, and the swimmer. So, in the beginning it was hard that I wasn’t just focusing on myself. I’m really experienced going into competitions and just focusing on my own races and my own routine and everything, but here I threw my routine out the window.”

“For the third competition I think I started to enjoy it even more, and I found energy even when I was really tired, because of my team. And I was able to push myself even more than if I was just doing it for myself.”