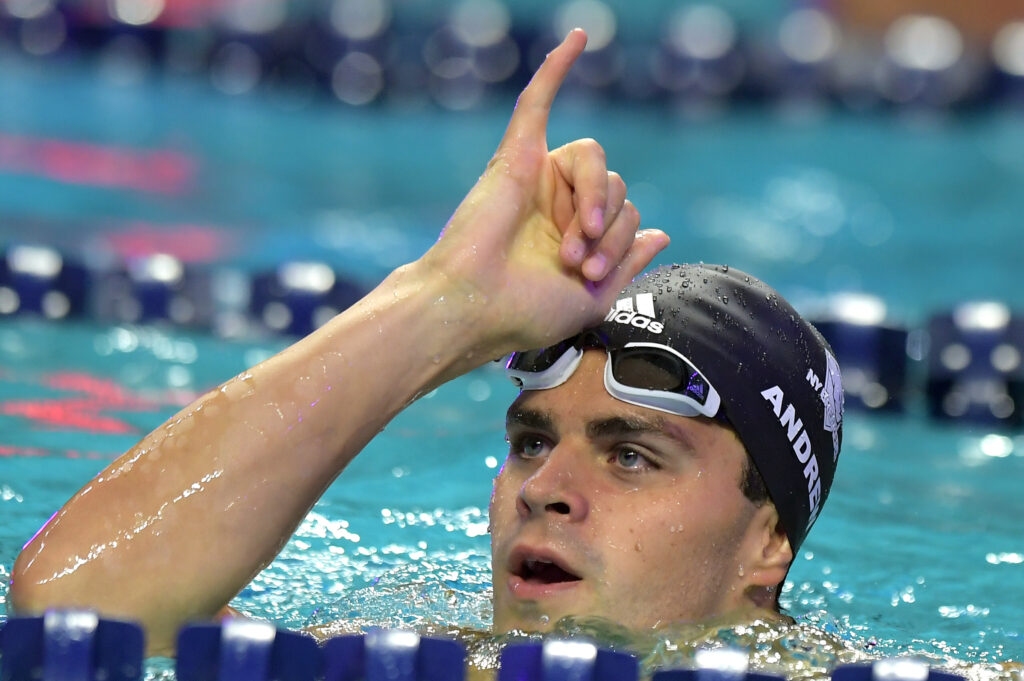 The opening day of the International Swimming League’s US derby match in College Park, Maryland, certainly lived up to the hype, as it featured a pair of tight team battles, plenty of very fast swims, and quite a few momentum shifts over the course of two hours.

Below, check out some of the storylines that emerged on Day 1 and how things might play out on Day 2.

The 23-year-old won the men’s 50 free and 100 fly on Day 1, but there are five other swimmers within six points of him, so he’ll have to keep his foot on the gas on Sunday. Michael Andrew of the NY Breakers is second with 21.5, followed by the LA Current’s Kathleen Baker and Beryl Gastaldello, who are tied with 21.0.

After his two individual wins on Day 1, Caeleb Dressel will have his eyes on becoming the first ISL athlete to win multiple MVP awards, and perhaps challenge his single-match points record of 57.5, on Day 2.

Andrew also finished second to Dressel in the 50 free, as he looks to be on the best form we’ve seen from him so far this season. Andrew’s performances has helped lead the NY Breakers to a third-place ranking after Day 1, and he’ll be crucial to their success on Day 2 where he’ll be a factor in multiple races, including the men’s skins (the three-round 50 free eliminator) which are worth triple points.

Michael Andrew’s first career ISL win has launched him into second in the MVP standings as he looks to challenge Caeleb Dressel on Day 2.

LA had one of their men’s relays get DQed, costing them 14 points, and also had one in an individual event. This could prove to be extremely costly as we move to Day 2, as the Current will need to be in the lead heading into the men’s skins race. Cali’s Caeleb Dressel will be near unbeatable for Cali there, a near lock for 27 points.

A pair of disqualifications could cost the LA Current the match if they can’t solidify a lead over the Cali Condors heading into the final event tomorrow.

Her times in both events were the fastest we’ve seen so far in the ISL season, and she’ll look to make it a perfect 9-for-9 individually tomorrow in the 100 breast, the event in which she is the reigning Olympic and World Champion.

Also shining for the Condor women in the breast events was Molly Hannis and Kelsey Wog, who placed second to King in the 50 and 200-meter races respectively. Those two events alone gave Cali a 17-point swing in their favor over the LA Current.

Lilly King continues to be the most dominant athlete in a single stroke in the inaugural ISL season.

The day saw both the DC Trident’s Ian Finnerty (men’s 50 breast) and the Cali Condors’ Melanie Margalis (women’s 400 IM) set new American Records, and we also witnessed two US Open Records (fastest-ever on American soil) from Caeleb Dressel (men’s 100 free, relay lead-off) and Siobhan Haughey (women’s 200 free). Finnerty still has the 100 breaststroke, his best event, on Sunday – after his performances in the 50 and 200, that record should be on notice as well.

After setting such a high standard on the opening day, look for the speed to only increase on Day 2.