ELECTRIC ATMOSPHERE LEADS TO FAST SWIMS AT ISL US DERBY 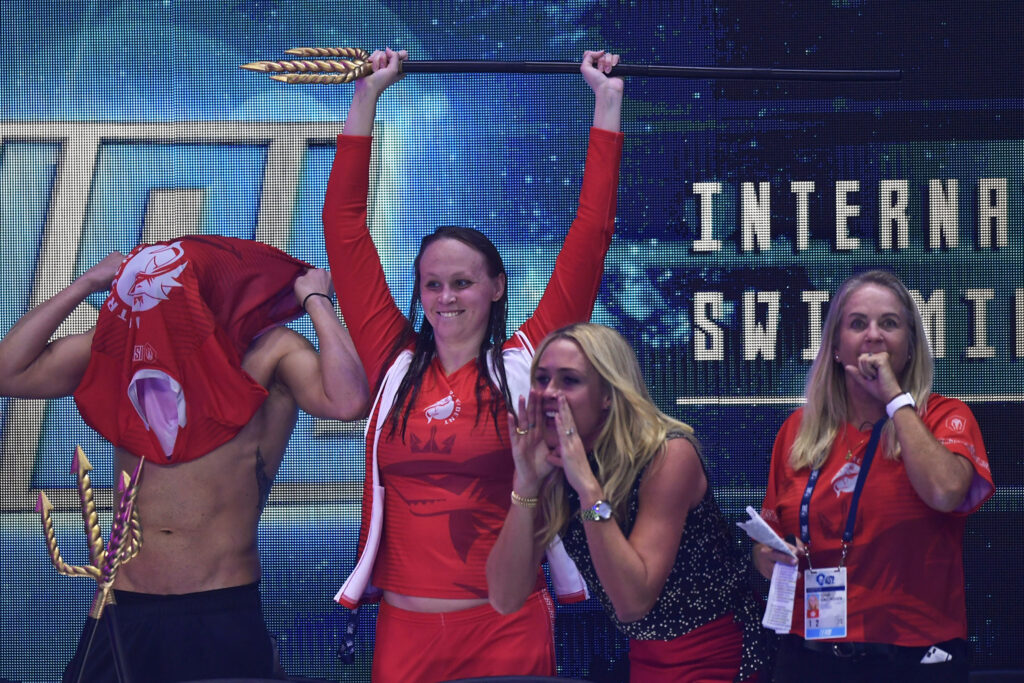 The opening day of the International Swimming League’s American derby match in College Park, Maryland, was full of fast swims and close team races as the four US-based clubs went to battle in front of an electric crowd.

“It was a great atmosphere as always,” said the LA Current’s Matt Grevers, the 2012 Olympic champion in the men’s 100 backstroke. “It’s awesome.”

After a tight battle with the Cali Condors throughout the session, Grevers and his LA teammates trail their state rivals by half a point heading into Day 2. However, they would be in the lead had it not been for a critical disqualification in one of their male relays.

“Obviously, we’d like to win,” he said. “That DQ hurt us a little bit, and we know (Caeleb) Dressel in the skins is a lot of points, so we’ve got to have a lead going into the skins. But it’s exciting.”

The skins are a three-round, 50 freestyle eliminator that are worth up to triple the points of a regular event. Dressel, who competes for the Condors, will be near-impossible for anyone to beat in that event, hence why Grevers know they need the lead going in.

For Dahlia, racing when the team race is so close is something she really enjoys and thrives on.

“It’s just a blast to swim in a team atmosphere where the points really matter,” she said. “When we’re neck-and-neck with LA Current, or with Energy Standard in the last meet, it gives you a little bit of extra energy at the end of a race.”

In addition to the close race in the standings, another thing that has stood out to Grevers so far in the ISL is the sheer speed in each and every match.

“I mean, there’s events here that are faster than Short Course Worlds, like all the time,” he said. “The 200 free, I think, one of the meets seventh place would’ve won Short Course Worlds. This is very fast swimming. This is the highest level stuff. It’s going to be like the Olympic final in Vegas.”

One of the swimmers who turned some heads on Day 1 with quick swims was the DC Trident’s Ian Finnerty, who won the men’s 200 breaststroke and also broke the American Record in the 50 breast.

“I was pretty happy with them,” said Finnerty of his performances. “It was nice competing in the 50, getting the American Record is obviously a bonus. Great race with Felipe (Lima) as well. It might be a little bit too short for my taste but it was a good experience.”

“The 200 really hurt, going out pretty fast. I did that in college, so it was successful there so I tried to do it here.”

Racing some of the athletes he doesn’t get to face normally is one thing the multi-time NCAA champ loves about the ISL.

“Just being able to race people that you don’t really get to race too often,” he said of what sticks out to him about the league. “We see a bunch of the Americans at the Grand Prix meets and the Pro Series, but being able to race some of the international talent is great. That’s the first time I’ve ever raced Felipe, and he’s a huge name in breaststroke. So it’s just a good experience overall for everyone.”

Natalie Coughlin, Finnerty’s Trident teammate and one of swimming’s all-time greats with 12 Olympic medals, has seen the sport grow before her eyes over the past few months as the ISL has launched.

“I think the ISL is really great and something we need to support, because it’s such a wonderful opportunity for both this generation and the next generation of swimmers,” said Coughlin.

“I think it has so much potential. You can see the stands were jam-packed. The fans were amazing, we sold out tonight. I think there’s a lot of momentum, it’s really special.”