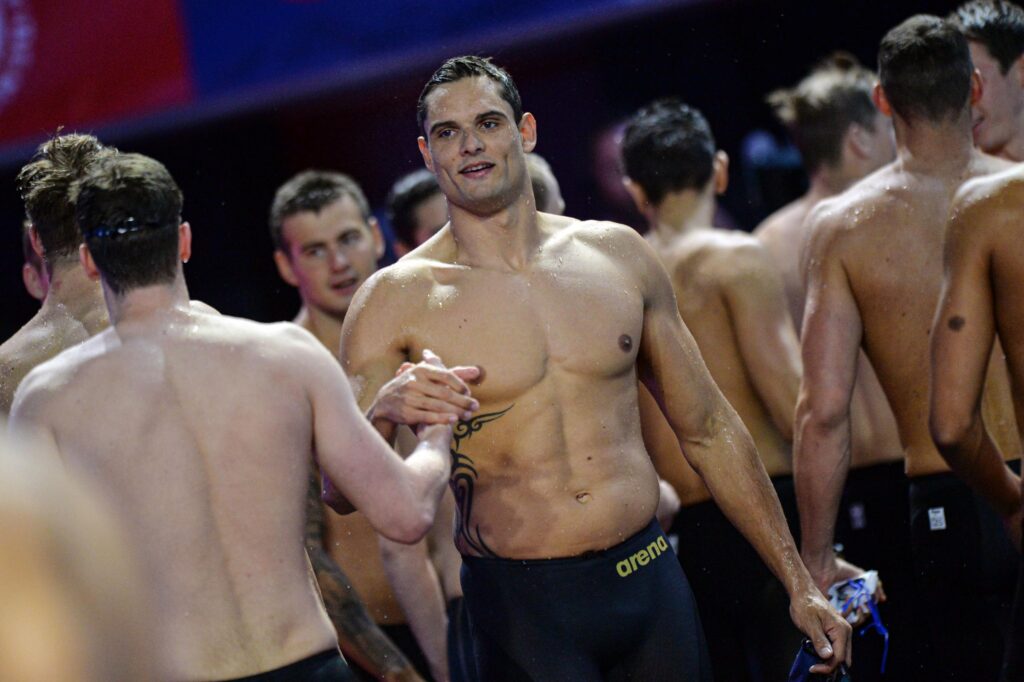 Florent Manaudou is someone who thrives on competition.

A native of Villeurbanne, France, Manaudou shocked the world when he won Olympic gold in the men’s 50 freestyle at the 2012 Olympics at just 21-years of age: very young for a champion of men’s sprints. In the following years he won four Long Course and three Short Course World Championship titles, and then picked up a pair of silver medals at the 2016 Olympic Games in Rio.

After that, he opted to take a break from the sport, opting to switch his focus to handball for a period of time. But it lacked the rush he was used to getting in the pool.

“I do this sport to (experience) this type of duel,” he said, when asked if he was looking forward to racing some of the world’s best in the new International Swimming League. “I like the adrenaline of competition. I missed it in handball.”

Along with the thrill of racing, the development of the ISL was a key factor in bringing the now 28-year-old back to the sport.

“Yes, clearly,” Manaudou said when asked if the new International Swimming League was apart of his decision to return. “I came back with the main objective of making a result for the Tokyo Olympics, but I know that I will be able to continue to practice my sport during the next Olympiad and not take a break as I did 3 years ago.”

Manaudou sees the ISL as the start of a new generation in swimming as it becomes more visible to the public.

“It is more than a development, it is a revolution,” he said. “There is of course the frequency which is important because it will give more visibility to our sport, but also the way to practice our sport by integrating a spectacular dimension and television viewing.”

The team aspect that the league has implemented is another facet that Manaudou believes will draw eyes from the outside.

“It includes a dose of “collective” in our sport which is generally individual. The excitement of swimmers and fans in the relay races is all that needs to be seen to understand the value of the new format.”

Manaudou competes for the Energy Standard Club, who have formed a training base in Turkey for the last few years. He enjoys the camaraderie that is developed from the atmosphere there.

“In Marseille, I used to live with a team,” he said. “I know it builds positivity and everyone benefits enormously. In addition, the swimmers you are with are people I enjoy spending time with outside the pool.”

Manaudou and his teammates had a very successful showing at the ISL’s opening match last weekend in Indianapolis, placing first by 82 points. He was one of the top performers, winning the men’s 50 freestyle, 50 butterfly,  and the skins event, a three-round 50 free elimination that is worth triple points.

But despite his success in the pool,  it was the feeling of being part of the start of something greater in the sport that stood out to him the most.

beginning because it opens great prospects.”