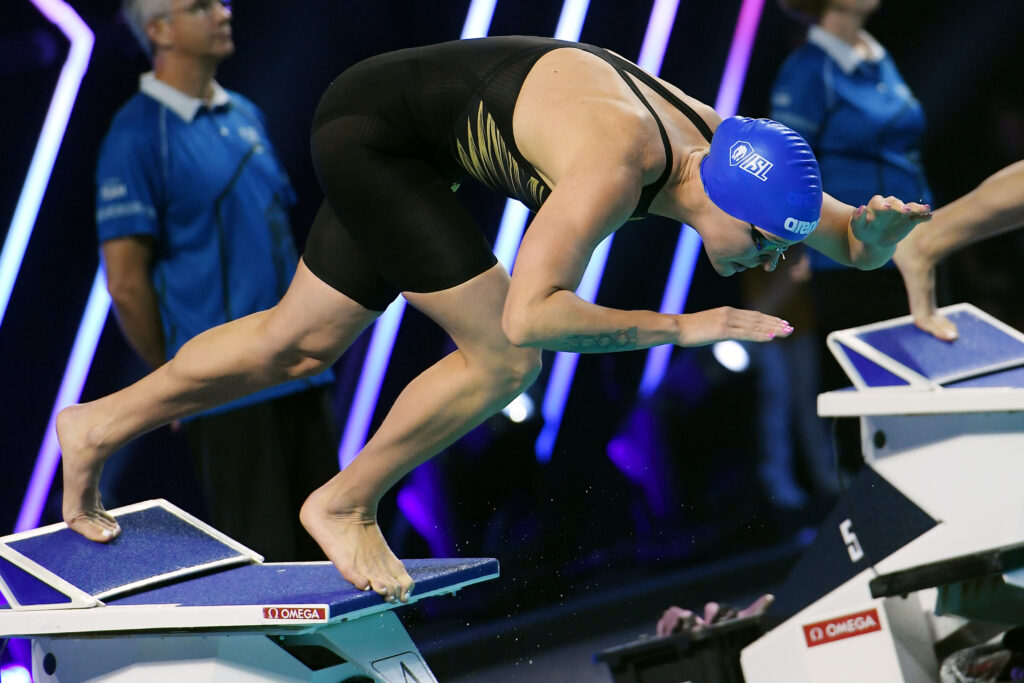 The added bonus to such dedicated teamwork? A $5,000 prize for Sjöström  — awarded to the 1 MVP of each of the regular season matches based on the total number of points won by each athlete.

The world’s best swimmers, including 41 gold medallists from the Olympic Games 2016, are competing on behalf of the eight clubs in regular season matches across Europe and the United States, with the season’s Grand Final being held in Las Vegas in December. More than $4 million in appearance money and prize money for clubs and athletes will be awarded during the season.

“I was so nervous to start the competition off,” the Swedish world record holder said about her historic wins. “This was so much fun,” Sjöström added when asked about the innovative make-up of the team-based league. With team boxes on the side of the pool, swimmers wearing distinctive astronaut-like jumpsuits, specially coloured caps and designated lanes with teammates next to each other, it was easy to follow a specific team in a fast and entertaining two hours with back-to-back racing.

The highlight performance of the weekend was delivered by freestyle superstar Katie Ledecky in the 400m freestyle. The five-time Olympic Champion missed the short course world record of Ariarne Titmus by only 0.08 seconds, touching the wall at 3:54.06 min – and not even knowing what she had just done. “I really did not know this was a fast time until someone told me it was an American record and that it was so close to the world record,” the DC Trident swimmer said. “I felt really good in training. I have had the best September I have ever had.”

Another highlight for swimmers and fans alike: the skins races in the 50m freestyle. A series of back-to-back races on a knockout basis, with the two remaining swimmers racing each other in a head-to-head final, all the while heavily cheered on by their teammates. And it was again Sjöström (25.11 seconds) who took the first win ahead of Energy Standard teammate Femke Heemskerk (25.42).

“I did a lot of skin races before, but on long course. I expected it to be a little bit easier on short course, but it was actually much harder,” Sjöström said. “It was a rough race for me. But I think it was very exciting for everyone watching it”, she added with a smile.

The men’s skins also was an Energy Standard-only event, with Olympic Champion Florent Manaudou (22.97) finishing ahead of Ben Proud (24.38). “It was so hard, but it was a lot of fun. I never smiled after a race like I did today,” Manaudou said.

These wins gave Energy Standard a comfortable lead ahead of the Cali Condors before heading to Naples for the second leg of the ISL season on October 12th and 13th . Energy Standard is taking 521 points to Italy, leading by almost 100 points over runner-up Cali Condors (425 points), followed by DC Trident (316.5) and Aqua Centurions (290.5).

But it was the performance of MVP Sjöström, securing 55.5 points for her team, which really put her and her Energy Standard teammates in the winning position.